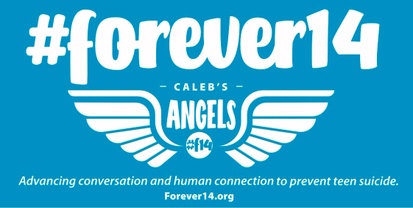 we miss you every day...

It's hard to believe that I had only 14 years, 9 months and 29 days with my son. That's 5,416 days or 129,984 hours. Each day I wake wishing I had one more, one more year, another month, one more day and if I'd have been home just one hour sooner it would've been me and not your Dad who found you hanging in the kitchen of the home you loved and wanted to live in forever.


My son Caleb Emil Stenvold died by suicide. He will be forever14. Caleb was the youngest of 5 boys. If you took the best of each of the four and combined them into one, that was Caleb.


Cay as we called him was thoughtful, adorable, funny, unabashed, confident, competitive, smart, neat and just getting started in high school. He had made new friends, his teachers liked him and his coaches admired his work ethic.


One of the first things that came to mind as I waited for the medical examiner to arrive was "Cay will be forever14" He won't be at his awards dinner tonight or any night. He won't go to anymore dances. He'd just went to homecoming and had a great time 2 nights before. We won't be going to France to put his french to the test. We won't be going to the 49er game with Uncle Shane. We won't have that kick ass party at Squaw for your 15th birthday next month. No more snowboarding adventures. We'll never know what you would've done in track, you were so damn fast and were going to break records. Now we'll never know.


What I do know is this, I will keep telling your story. The story of a boy who had it all. A kid with opportunity and privilege. A boy from a good family on the right side of the tracks. A child well loved and provided for. A teenager slaying high school and impressing the upperclassmen. A player that believed he could so he did. A friend that left behind an ARMY OF ANGELS I used to call your friends or as you called them "Bruh".

please put down your phone & connect with those around you.

Caleb was a son, brother, student, athlete, and friend to all yet no one saw his pain. We must do better. On the 14th of every month, we urge you to “tech out & check in” - put your phone down, truly connect with those around you. Get outside, play games, notice someone new, play 20 questions with a friend...have fun!